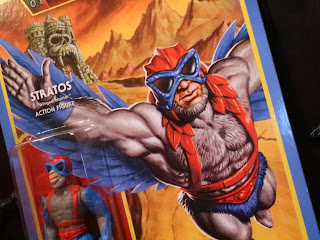 I hate to pick on the guy but if I have a least favorite figure from the original 1982 series of Masters of the Universe figures it's definitely Stratos. Maybe it's because he didn't come with a weapon or maybe it's just that I never owned Stratos as a kid. Who knows? Anyways, I've certainly made up for not having Stratos as a kid as I now have a pretty sizeable collection of Stratos toys. Since my contribution to the Masters of the Universe Day celebration this year is to show off the wide range of toys inspired by the original 1982 series of MOTU figures let's take a look at one of the more unusual MOTU lines out there: Super7's Masters of the Universe ReAction. The ReAction line has been around since 2013 and was originally a joint venture between Funko and Super7 to put out figures of the developed but never released 1979 Kenner Alien toyline. Over the years Super7 took over the line completely and they've been doing a great job with it. The idea behind the ReAction line is to create action figures in the style of the vintage Kenner Star Wars line. It's strange to see Masters of the Universe in the style since it was a toyline created to rival Star Wars and to be bigger and brawnier than Kenner's toys, but there's also a peculiar "alternate history" kind of appeal. Stratos was originally released in the second series of figures with his red wings/ blue jetpack color scheme but today I'm checking out the blue winged Stratos, one of the three Power-Con 2018 exclusive Stratos figures (the other two were minicomic Stratos and the blue bearded Stratos). Let's check out the ReAction Stratos after the break and see if he flies high! 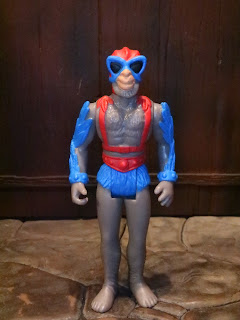 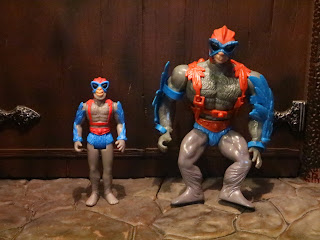 * Just for fun here is a comparison between the ReAction Stratos and the vintage Mattel Stratos. They're quite similar in design though the aesthetics are radically different! 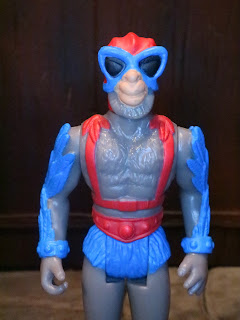 
* While the ReAction line did it's fair share of sharing parts, Stratos is mostly unique due to his sculpted on harness and wings. He really does have all of the details you'd expect though he's slimmer, just like a vintage Kenner Star Wars figure. Could this guy hang out at Cloud City with Lando and crew? I think so! 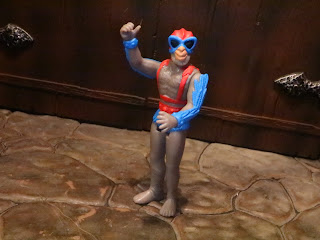 *   If you've ever picked up a retro figure like this, you know what to expect: 5 points of articulation, all swivel joints. Stratos feels very well made and sturdy.  Super7 has been very consistent in the quality of their ReAction lines over the past couple of years and has definitely perfected the style. 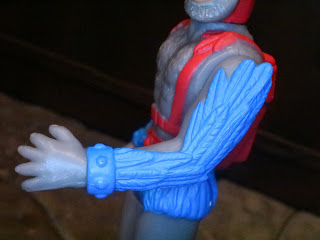 * While Stratos doesn't come with any accessories, he does have some fairly intricate sculpting on his wings. This might be a bit beyond late 1970s Kenner but it easily could have been something early 1980s Kenner would have done. 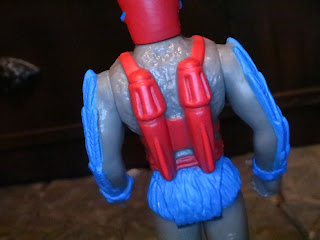 * Stratos also has his really cool jetpack sculpted on his back. The paintwork is really neat and clean on the figure and while it's simple, it helps make all of the details pop out. 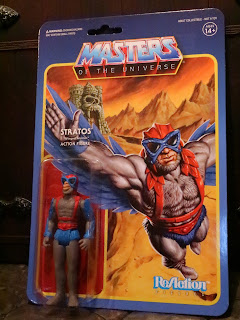 * The card art is excellent on most ReAction figures released by Super7 and their Masters of the Universe line is no exception. Stratos features a beautiful illustration of the character by Jason Edmiston. I love how it looks like Stratos is flying right at you! To preserve the card I actually made a slit in the top of the blister so I can slide the figure in and out. It work great and allows the figure to be displayed inside and outside of the card. It even worked on the two tiny blisters that the additional weapons are included in. I've got mine hanging on a metal pegboard similar to what you'd see in a retail store! 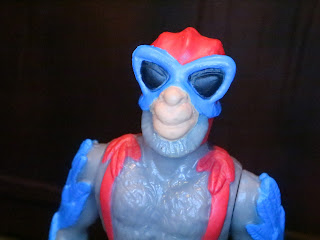 
* While the heads are sculpted to appear as if they're from a more primitive era, Stratos' features seem far too exaggerated. He kind of looks like Yak Face, doesn't he? 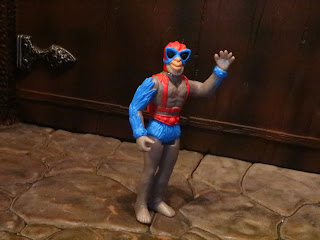 I know not everyone digs the ReAction line but I really liked it and I'm quite disappointed Super7 lost the MOTU toy license. While they released nearly 100 figures in the line they really didn't even begin to delve into the wide range of characters (they definitely released lots and lots of repaints and variants). Stratos is a solid entry in the line, though; he's not the most exciting but he's still a Good and a 1/2 figure and a great representation of one of the key MOTU crew. If you've ever wondered what Masters of the Universe could have looked like had they not had Roger Sweet championing the idea that He-Man be the biggest, baddest action figure on the market, the ReAction gives you an idea!


If you're a Stratos fan then check out my review of the M.U.S.C.L.E. green Stratos from series #2, the minifigure Stratos from the 200x Heroes Vs. Villains Gift Pack #1, the Mega Construx Stratos and the Mega Construx Heroes Stratos, the Monogram International Stratos bag clip, the Club Grayskull Stratos, and Super7's Neo-vintage Stratos.