The elephant in the room

Another AMAZING day with Karen. It's incredible how much one can learn by observing, and I did a lot of observing. I'm thankful I had that opportunity!

Once the event was over and I could cash out (more on that another day), I was on my way home. It had been raining like cats and dogs earlier in the day, with gale-force winds. Did I want to drive in those conditions? However, the rain stopped, and the roads were dry on the way home. But the wind? It was windy, and I had to keep a firm grip on the wheel in my little car. Especially since I had to cross FOUR very high bridges. On the last one, the wind was incredible, and the car was jerked around like it weighed nothing!

Besides that, it was an uneventful trip, and I must be getting used to driving long distances as I made the close to 3-hour trip without stopping. It's like reading -- when I started to read novels after many years of reading magazines, it took a few months to gain back my attention span.

Oh -- I forgot to mention that I lied at the border! The agent threw me for a loop with her line of questioning. When I left, I said I would visit with a friend and go shopping. No big deal -- I was through in seconds. When I returned, I was asked why I was there, and I said the same thing. Then she asked where I had met this friend. ACK! I should have said in Canada and that we were meeting to go shopping. Nope -- I said I met them on the internet. Then I got asked if I was dating this friend! Oh!!! Although I didn't buy much, she never asked me how much I bought, only what I bought. But there was NO line-up, and I was through in mere seconds.

Here's one thing that I unpacked this morning. My two gorgeous chenille yarns!!!

They are safely tucked in the bucket with the other chenille yarns. I have wanted these rich colors for a long time, and now I have them! Now to make something from them. I have to make a scrappy background first! I'd love a rich green and blue, as well.

And my game/puzzle advent calendar was waiting for me when I got home. So there's a LOT of advent calendar stuff happening this year. I will wait until I've walked the dogs to enjoy the advent process over my cup of tea. I'll check out the opening of some that I know will be posted on YouTube or Facebook, and I have two to check. So I will only look at social media once I've opened mine!

I was up bright and early and got the next giant quilt on the long arm. The long arm will be my focus for the next two weeks. Well, I have classes as well, and we have our THREE discussions this weekend about going forward with clubs, so I'll be quilting, but I've got other things as well.

Then this happened. If you remember, that big shelf was in the middle of Studio B when I left. I knew it wouldn't work in the community project storage room, so I put that room back together this morning.

Before I left, I had put that stuff on the floor into a tote, so it didn't look so messy.

And there's another pile of stuff I was supposed to clean up during the Virtual Retreat that is still sitting on the floor. The cutting mat is crammed with more stuff!
And here's the elephant in the room. It's a big shelf, thankfully on wheels, but it can't stay where it is, and I'm convinced that the new machine is going where the shelf used to sit. So that's a problem.
Time to look at the stash room. Oh yes -- it's time to play Tetris!! My vision is to put it where the bookcase is sitting.
That means all this sitting in front of the bookcase must be dealt with. Sigh -- one thing leads to another!
So I got to work and removed all the stuff from the floor. It took little time, as it was all in baskets.
And then I moved the shelf into the room. See -- there's a big shelf on the end of the other two.
The photos look a bit cramped, but there's room for me to walk. On the left is the big shelf I just added. On the right is the mannequin, which needs to go! Does anyone want a mannequin??
The bookcase got moved to the other end of those two shelves. So now I have an island in the middle of the room with three big shelves on wheels and a small bookcase.
And this is in the other aisle with the permanent shelves on the left and the back. The island is on the right. It's not ideal that those tubs of fabric are on the floor on the left, but as I remove stuff from the permanent shelves, those tubs will get emptied. It's primarily pre-cuts. Yes -- that is Murphy; who was scouting for treats? Sorry -no treats for dogs in that room!
I want to take everything off those three shelf units in the middle and go through all the project boxes to see what can be pulled apart. There are projects I set aside intending to make but have yet to get around to it, and I may work on that slowly while I'm quilting, but I have other things to focus on, which you'll see in a minute.
I did lose the top shelf on that shelf because the ceiling was low. But by the time I finish tidying, I won't need that space. And it had some flat stuff on it, like my mini design boards, and they could go back into that space.
Plus, there is still room on that second from the top shelf where the flannel used to sit. Those baskets can be grouped better and more stuff can go there.
And there is a corner in the permanent shelving that is empty!
So the elephant is gone from the room, but this remains! It's not as bad as it looks. Three baskets of clothing need to be cut down to make memory quilts, which could easily save a TON of space by dealing with it. Some of this will go back onto the shelf. There are some bolts of interfacing, which I hope to put with the bolts of fabric, but no room yet. Once I start quilting the next batch of Quilts of Valour quilts, I hope to see some empty bolts of fabric! 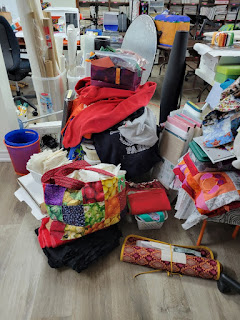 And the work area is a bit messy. Again, some of the stuff will go back onto the bookcase or the shelf I moved. Once that is done, I'll deal with what is left. But the plan is to find empty pockets of space for everything that got moved, what was on the floor and the cutting table, and what is on the current project table. There is room for it all! I need to make that happen. Once that is done -- guess what? I'm done!
That will be the last bit of sorting that needs to be done. Then as time goes on, I'll need to cull or sort or label or whatever, but everything should have a home, and NOTHING will remain out. I want a shelf for current projects, but there should be little on it. After all, how many can one work on at one time?
By removing the baskets of clothing, I've now opened up the area in front of the peg board where my rulers and other sundry items are stored.

It will be worth my while to remove everything, remove what I no longer use, and get rid of it. So now that everything will have a home, then it's time to sort and cull. But I won't have to make a huge mess to do that. I can take it shelf by shelf or bit by bit. But I'm so close!!!

Did I take pictures at the end of last year? It would be amazing to see the progress from year to year. I should find the pictures of what it looked like BEFORE we had any water issues, and it was a disaster. I might be embarrassed to show those. No, I won't. It would be eye-opening to show how far I've come!

I'm very proud of my space and how much I've done to make it my own. I'm NOT proud of how much is there, but I've taken responsibility for it. It shocks me when I hear people say -- I don't care -- I'm letting my children deal with it. Seriously??? How selfish is that? If I were the children, I'd just torch the house! I wouldn't, but amongst my siblings, we joke about whether it will be death by match or bulldozer. It's NOT responsible behavior at all. Now I know some people have mental health issues and don't see the problem, but still! As a child of a hoarder, you do NOT want to be that child!

Well, that's it for travel for me for the year. I'm home and heads down getting some work done, cleaning up Studio B, quilting, sorting, and all kinds of other fun stuff. It was a great two days and well worth my time!

But I'm also so inspired to create and share my ideas with people that I won't be sitting idle! And I have three jigsaw puzzles I want to work on over the holidays, and I must be sure to do that!

Well, I've got to get myself going!!